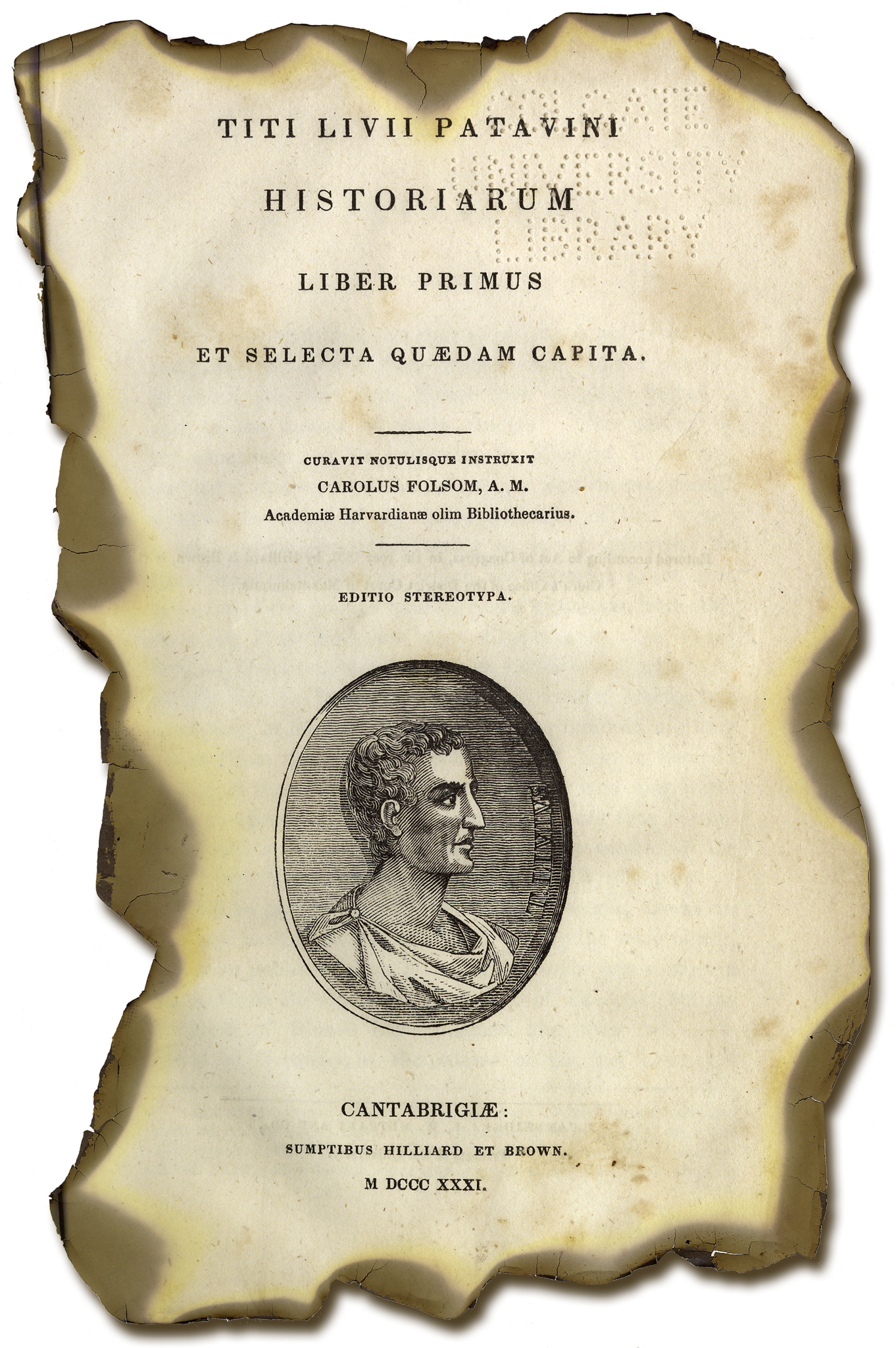 The Origins of the Tradition

The early students at the Institution were required to read Livy’s Ab Urbe Condita Libri in their first year. This work was an integral text in the intermediate Latin curriculum throughout much of the history of the Classics at Colgate. Leonard J. Matteson, describing the demands of his first semester of study in 1853, writes that each day he prepares “20 lines in Livy & 15 in Iliad” for recitation.1 In celebration of the conclusion of their first year of study, students conducted a funeral procession and service replete with comic oration, poem, Latin address, and eulogy, culminating with the cremation of Livy which entailed burning all their collected books of Livy in a single funeral pyre. 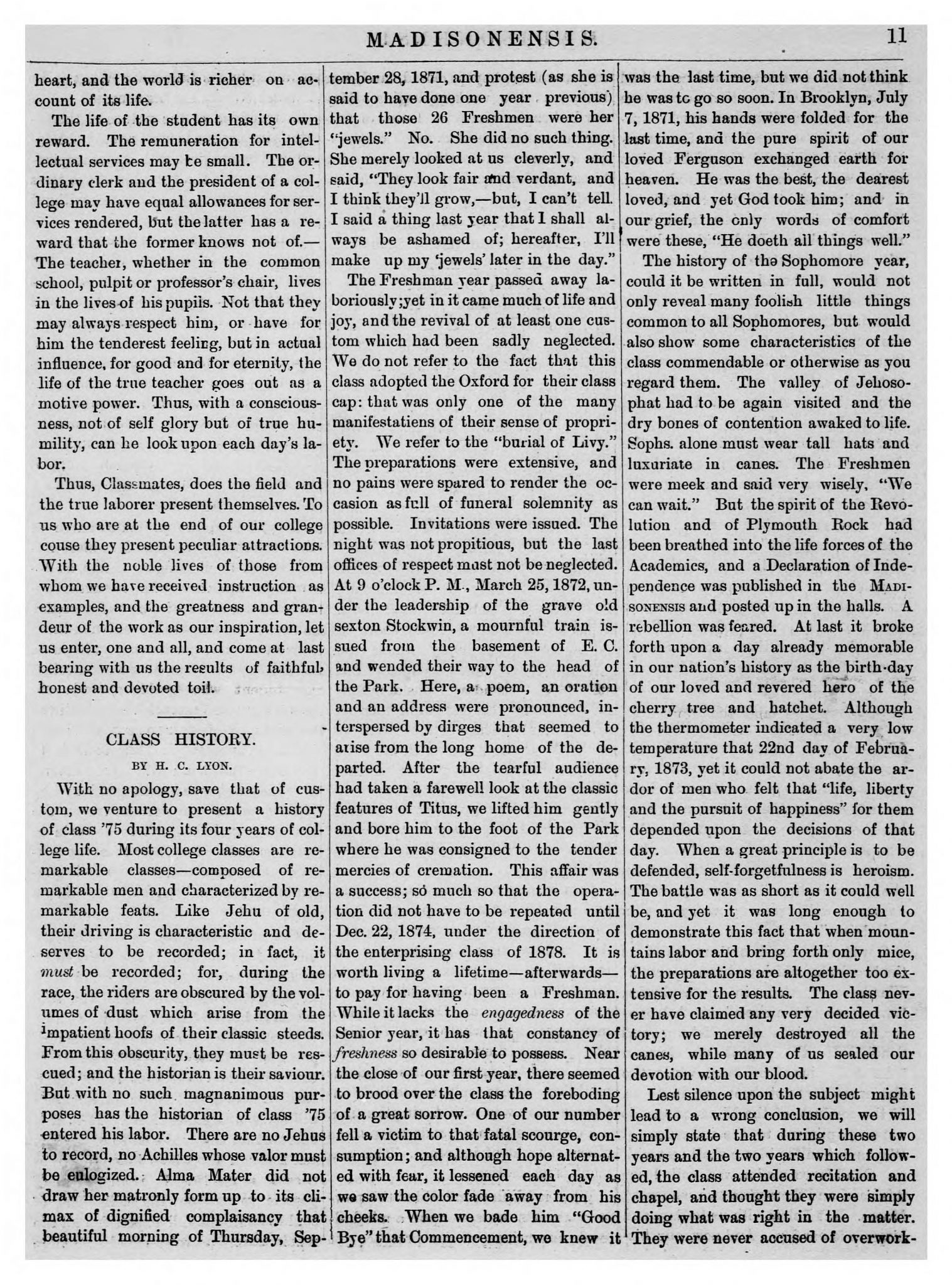 Student’s description of funeral service and cremation of Livy in 1872. 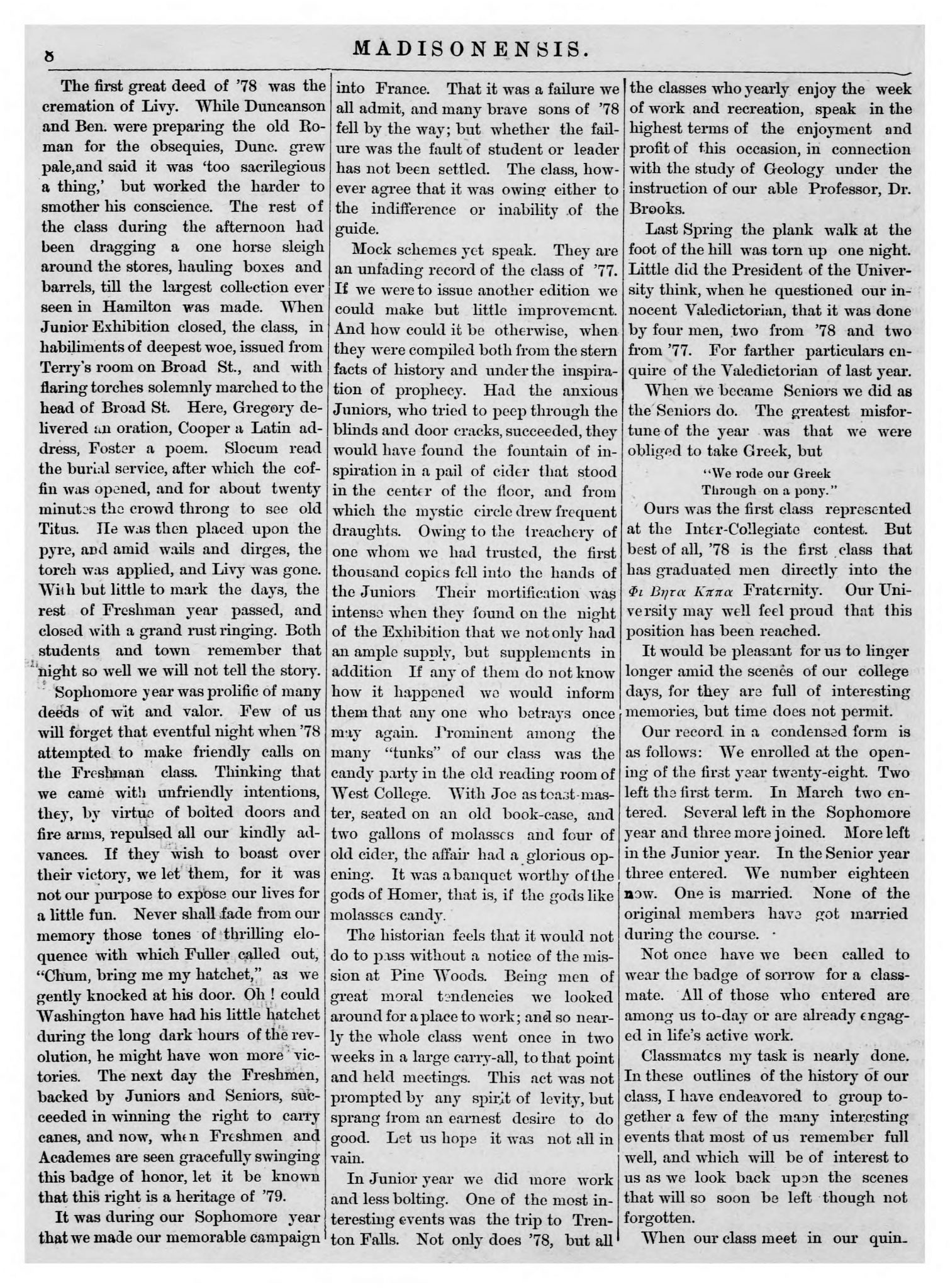 Student’s description of funeral service and cremation of Livy by the Class of 1878.

Student’s description of the resilience of Livy. “College and Town.” Madisonensis, December 10, 1881: 8. 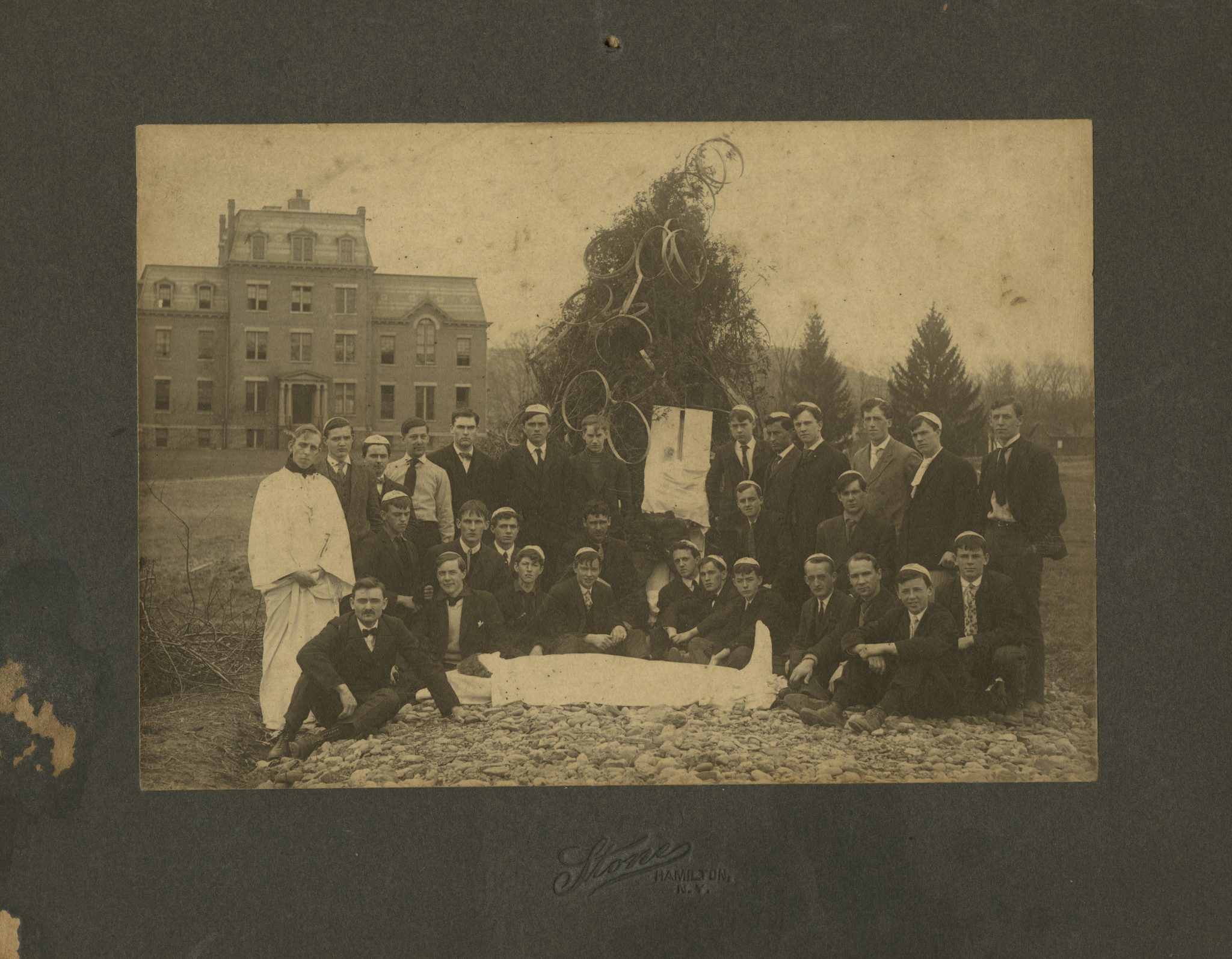 Colgate Academy students participate in the “Burning of Dido” tradition,

The Hamilton Academy and The Burning of Dido

Dido, in Virgil’s Latin epic Aeneid, is the Carthaginian queen whom Aeneas abandons to found a New Troy in Italy. In grief, Dido prepares her own funeral pyre before taking her life. In this photo, students from the preparatory school, the Hamilton Academy, recreate the death of Dido. This tradition parallels the tradition of the “Burning of Livy” carried out earlier at the university.

This funerary tradition was adapted over time for other texts. “Ponies,” English translations of Latin texts that were much hated by professors, were burned in celebration by students at the end of the semester. As the popularity of the Classics decreased with the emphasis of the Institution shifting from a seminary to the university it is today, this tradition expanded  further to include burning calculus textbooks following a student’s first year.

Beware of the Pony

"Cave Equum" translates “Beware of the Pony” and plays on the Latin phrase “Cave Canem” from the House of the Tragic Poet, located in the ancient city of Pompeii, destroyed by the eruption of the volcano Vesuvius in 79 CE. “Cave Canem” means “Beware of the dog!” and is written on the entry hall mosaic to warn visitors to enter the house at their own risk. In a similar way, “Cave Equum” warns students to use “ponies” at their own risk. 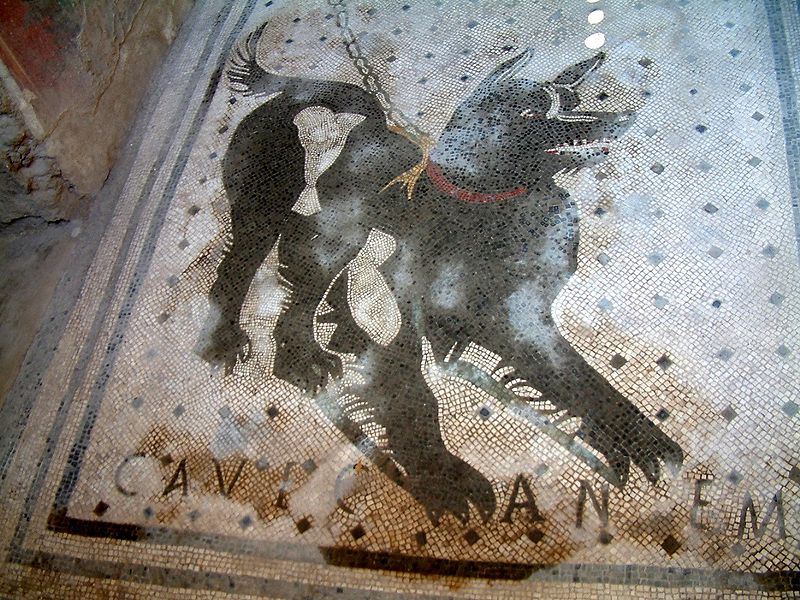 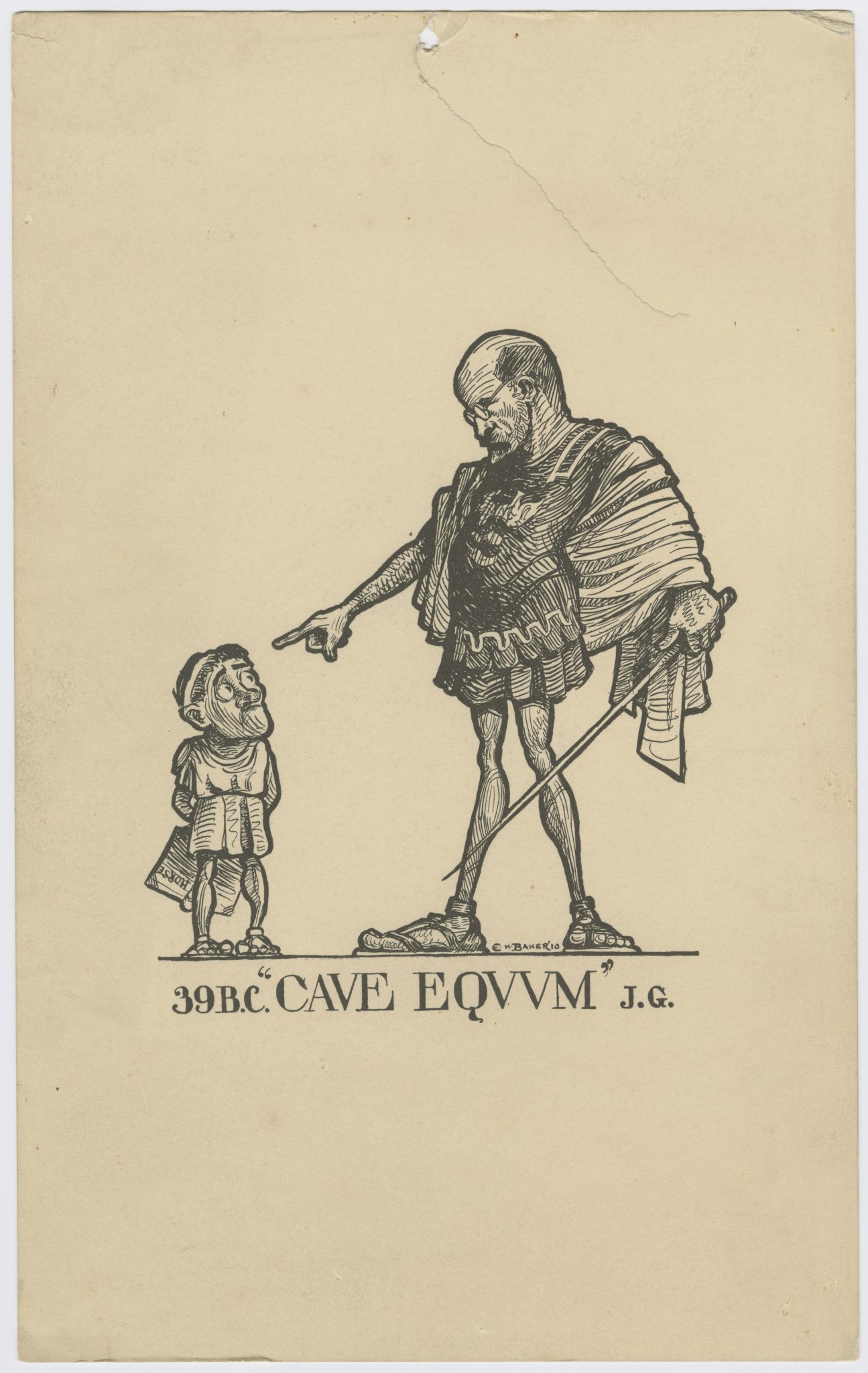 Caricature of John Greene, scolding a student for using a pony to aid in Latin studies.

To Seal and Motto