Identity Reflected in the University Seal

Origins of the University Seal

The first seal associated with the school differs greatly from the familiar design of Colgate’s seal. The Hamilton Literary and Theological Institution inherited the seal of the New York Baptist Theological Seminary that was founded in Manhattan in the 1810s. Although the seminary had the support of William Colgate, the school was short lived. Its library and other assets (including its seal) were transferred to the Hamilton Literary and Theological Institution in 1823. The seal depicts a flying angel holding in her right hand an open book, presumably the Bible, and pointing upward, possibly to heaven, with her left hand. The border of the seal is inscribed with an abbreviation for “Baptist Literary and Theological Seminary, New York.” 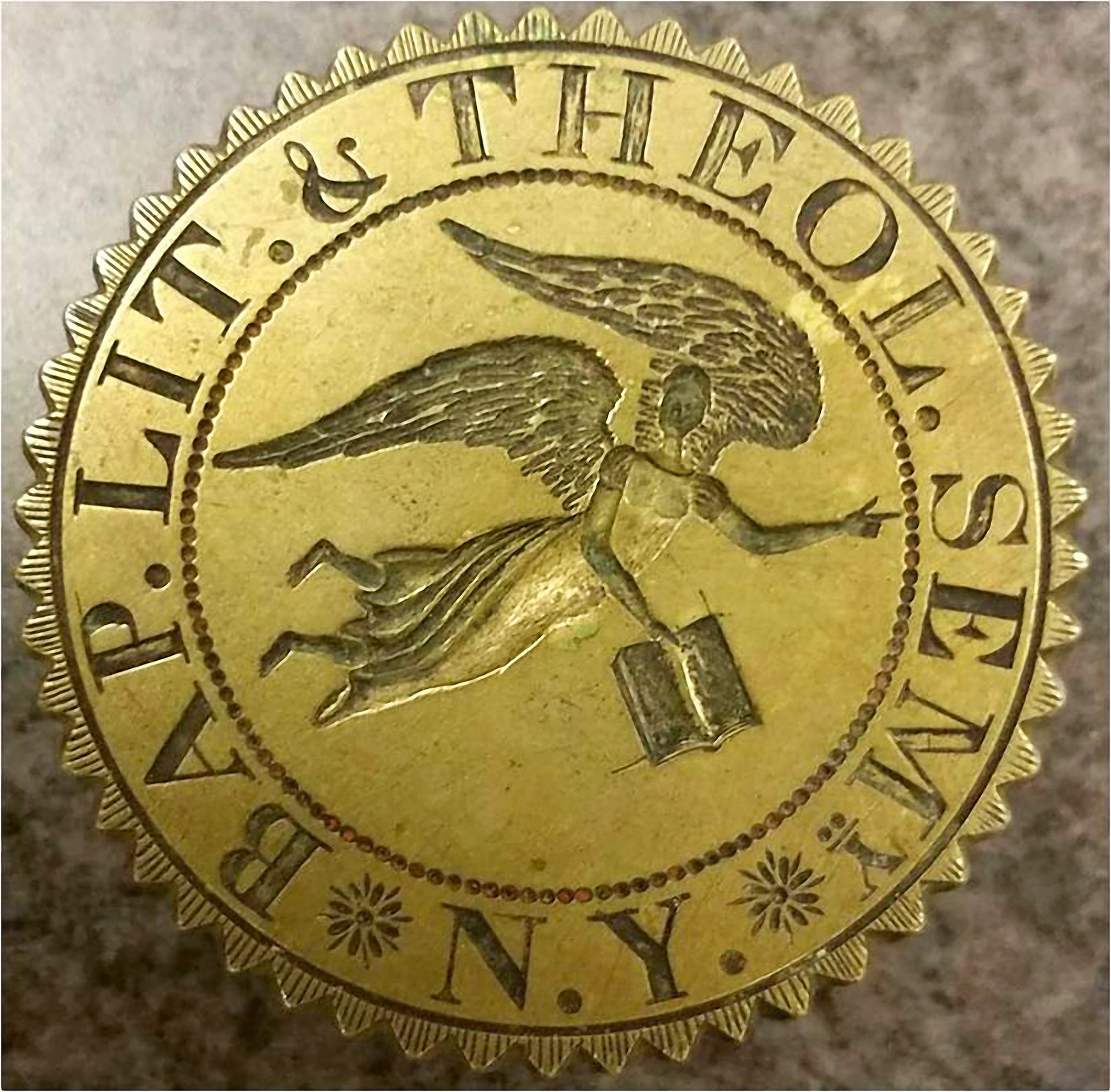 The seal of today owes it origins to the needs of the newly incorporated Madison University in 1846. Professors Asahel C. Kendrick, John F. Richardson, John H. Raymond, and three University Trustees designed the university seal, depicting a hand grasping a torch and an unfurled scroll bearing the Latin motto “Deo ac Veritati” (For God and Truth). 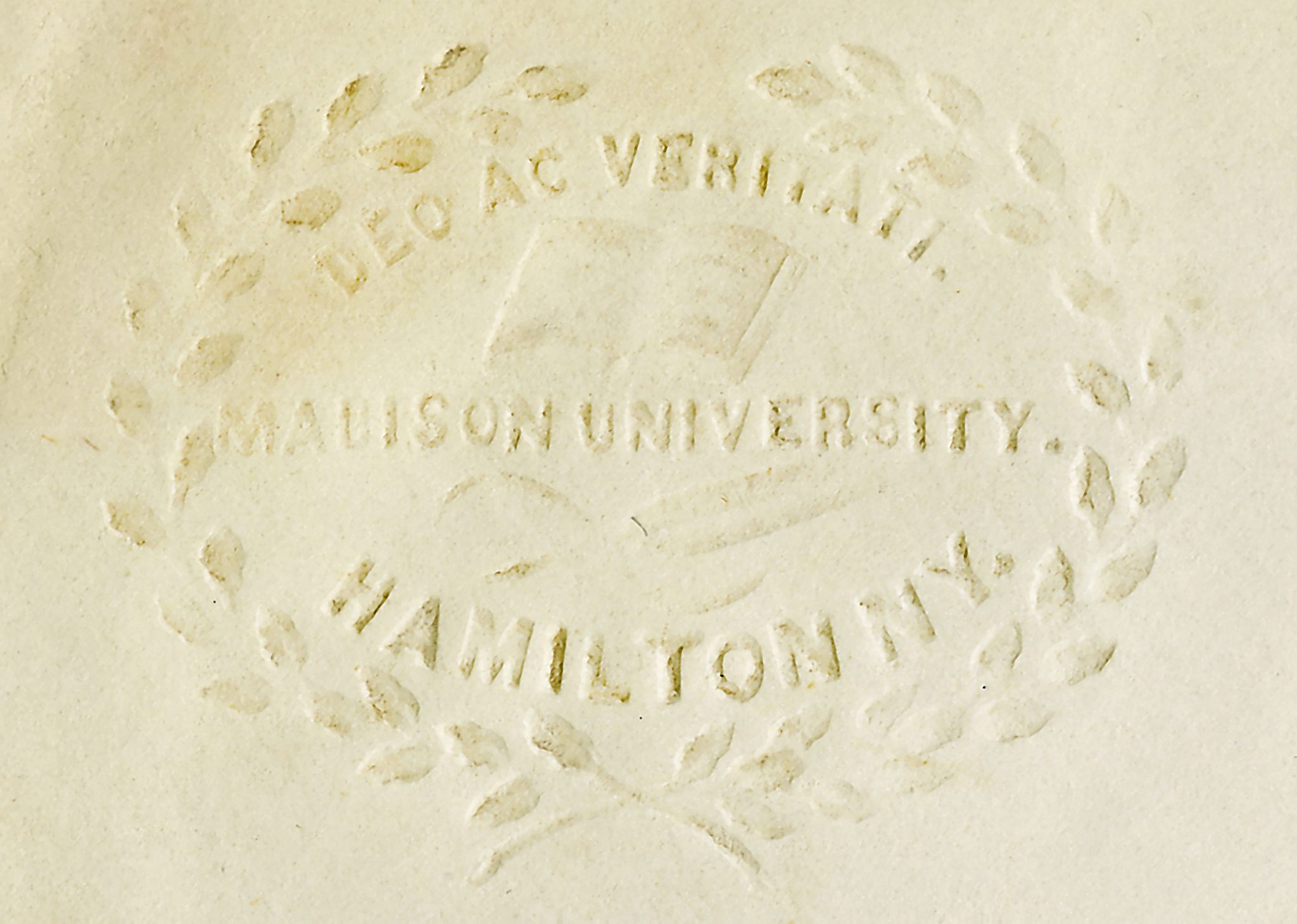 Image of envelope with embossed stamp of Madison University, 1861.

An embossed stamp on an envelope, dated May 15, 1861, is noteworthy for combining visual elements of the earlier seal of the Hamilton Literary and Theological Institution with those of the later seal of Madison University. The motto, “Deo ac Veritati,” appears at the top, “Madison University” in the middle, and “Hamilton, N.Y.” at the bottom of the stamp. Its composition and imagery are somewhat unusual. A laurel wreath encircles the three lines of text while an open book is represented in the upper portion of the impression and a quill pen in the lower portion.

Department of The Classics Library,

in front of James B. Colgate Hall.

Variations in the Design of the University Seal

The seal at the far left is from the bookplate of a book owned by Samuel Colgate. A right hand with a sleeved arm holds a torch vertically in the center of the composition. The image is exceptional in recording the date of incorporation of Madison University in 1846, because most versions of the seal refer instead to the school’s founding date of 1819.

The next seal is from the cover of the 1915 Salmagundi, the university’s yearbook. A hand with a cuffed sleeve holds a metal torch. The seal records 1819, when the school received its first charter, as the founding date of the university.

The seal following is from a bookplate in a book prepared by Barker Newhall for college level instruction of Plato in 1900. The metal torch tilts to the right and two spirals of the scroll reveal the first two words of the motto. This seal is more frequently reproduced, figuring prominently in the volumes of the Salmagundi of the first half of the twentieth century.

The final seal to the right is the current iteration. The scroll bearing the motto encircles a vertical metal torch. The date of the design of this seal is uncertain, but it is widely used as the basis of the university’s branding initiative today.

The Classical Doorway of Lawrence Hall 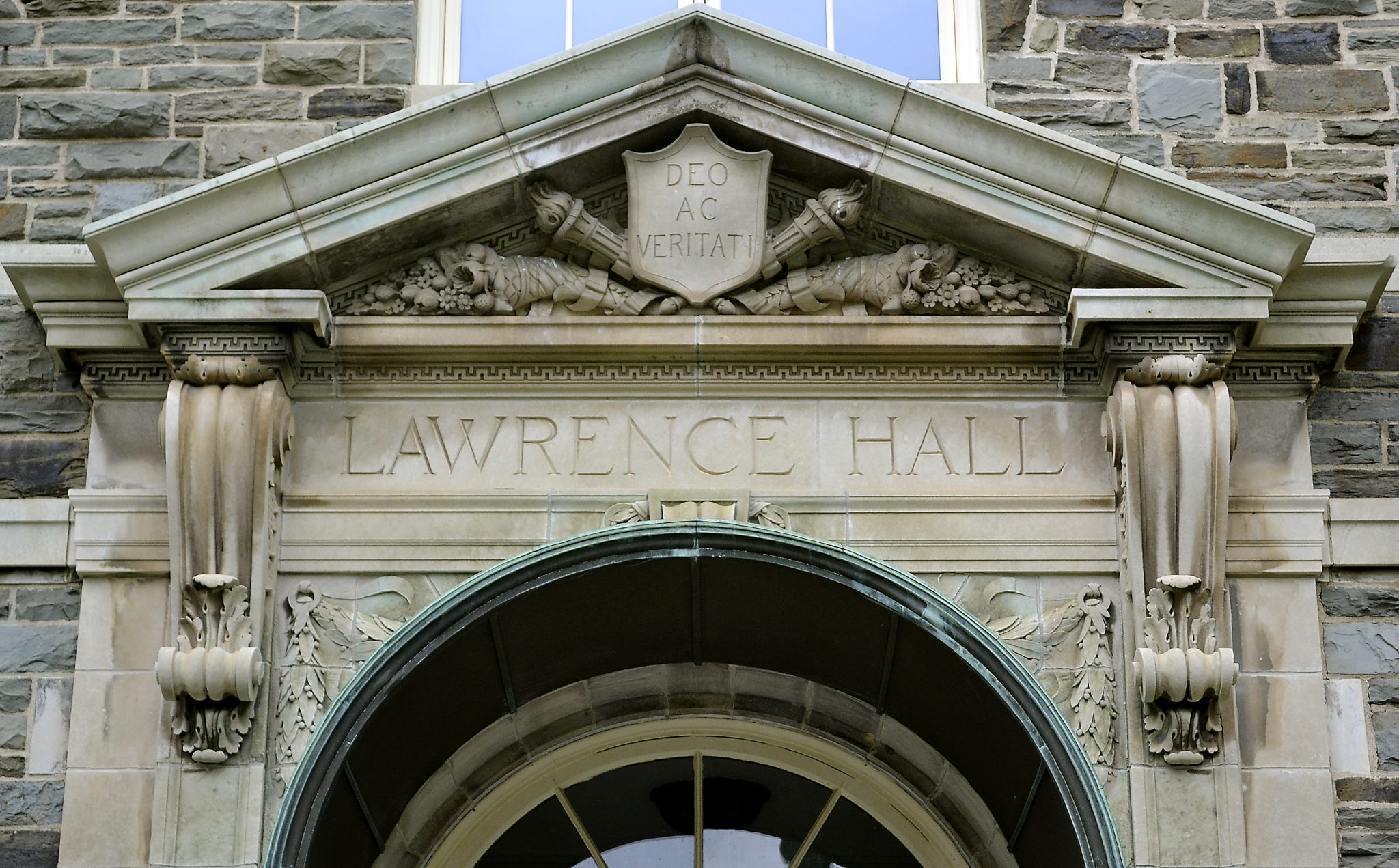 The main entrance to Lawrence Hall, home of the Classics Department, exemplifies the influence of classical architecture and iconography on the building that was constructed in 1926. A classical pediment rises above the arched doorway. A narrow course of squared meanders accents the triangular shape of the pediment, supported on either side by acanthus-clad modillions, or brackets. Garlands of laurel fill the spandrels of the arch. A shield inscribed with Colgate’s motto “Deo ac Veritati” fills the center of the pediment, while crossed torches, paired with flower-laden cornucopiae, flank each side of the shield. A scroll, reminiscent of that of the Colgate seal, wraps loosely around the torches and cornucopiae. 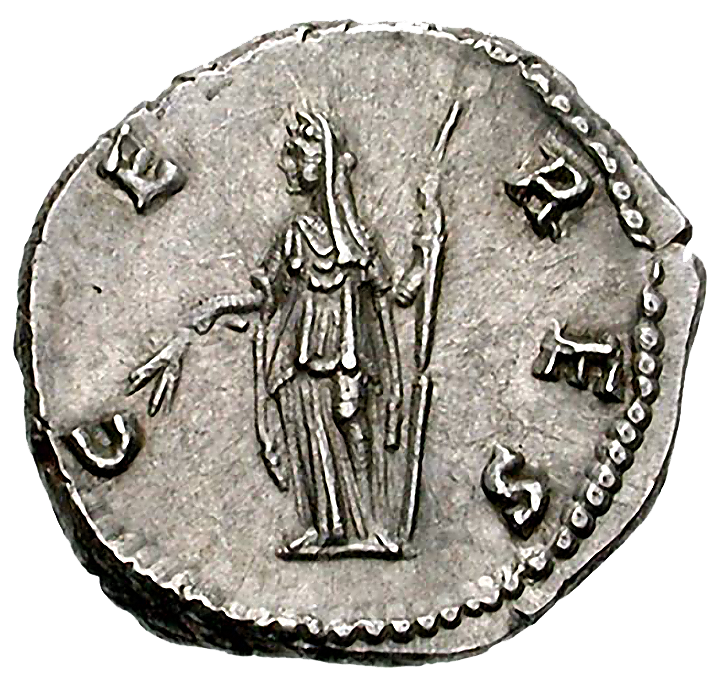 In antiquity, the cornucopia represented abundance. As an attribute of Ceres, the Roman goddess of agriculture, it symbolized her service to mankind in giving them the gift of the harvest, the reward for cultivation of the soil. Ceres, was credited with teaching humans how to grow, preserve, and prepare grain. She was thought to be responsible for the fertility of the land.

The knowledge, mastery, and use of fire figure among the most important achievements of humanity. Greek myth envisioned fire as the gift of the Titan Prometheus to humans, and this divine origin of fire made it a sacred element. The Greeks maintained perpetual fires in front of their main temples, and several of their religious festivals involved torch races, transferring the sacred fire from one altar to another. The torch was also used to provide light in the dark. The torch, as a source of light, is associated with the light of knowledge.

The laurel tree was sacred to Apollo, god of music and poetry. A wreath made of laurel leaves was awarded to the victors of musical contests held in honor of Apollo. The first Roman emperor, Augustus, claimed Apollo as a patron god and used the laurel as a symbol of that relationship. Since antiquity, the laurel wreath has been a symbol of victory and excellence in the poetic arts. In an academic context, the laurel is associated with the achievement of earning a university degree. 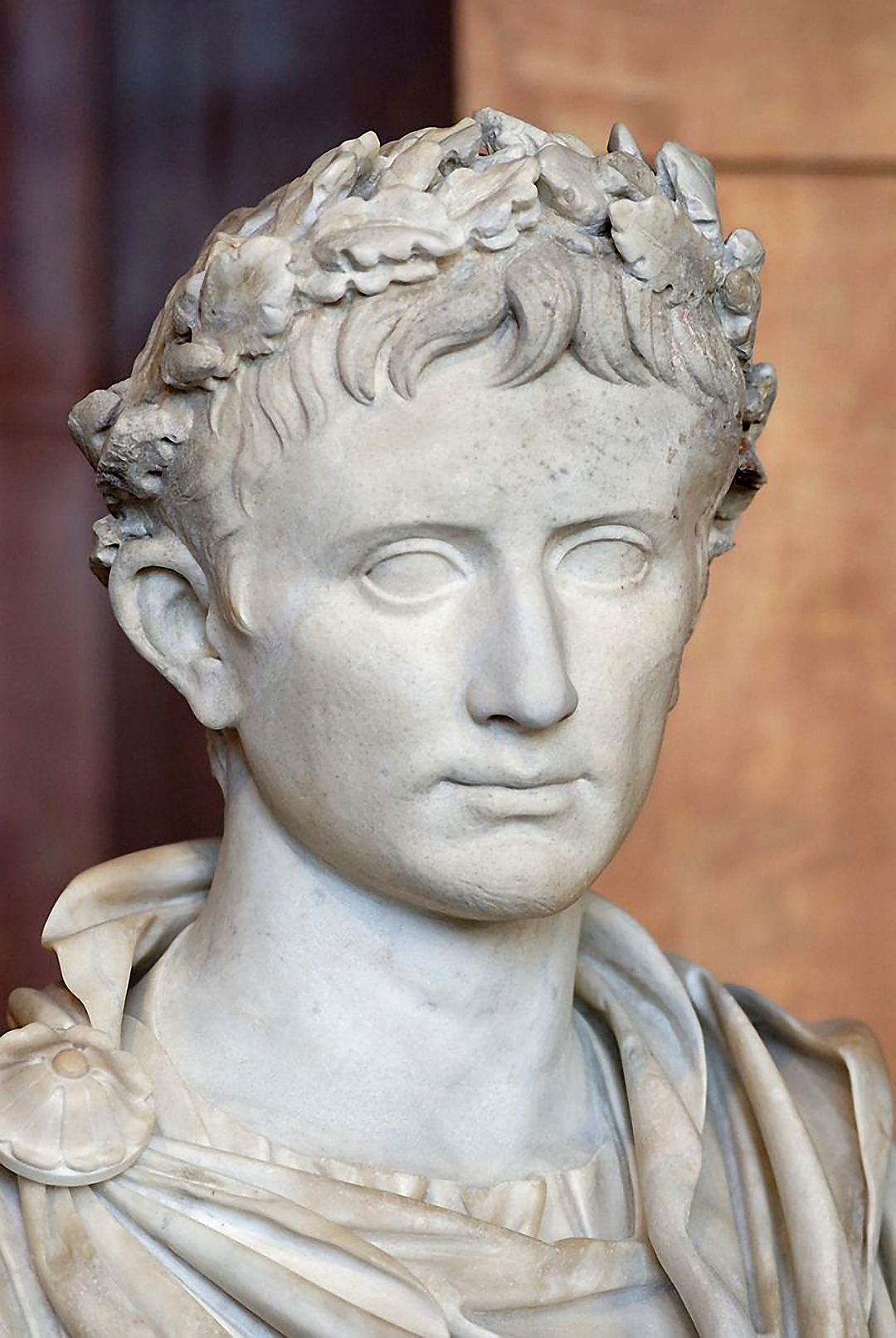 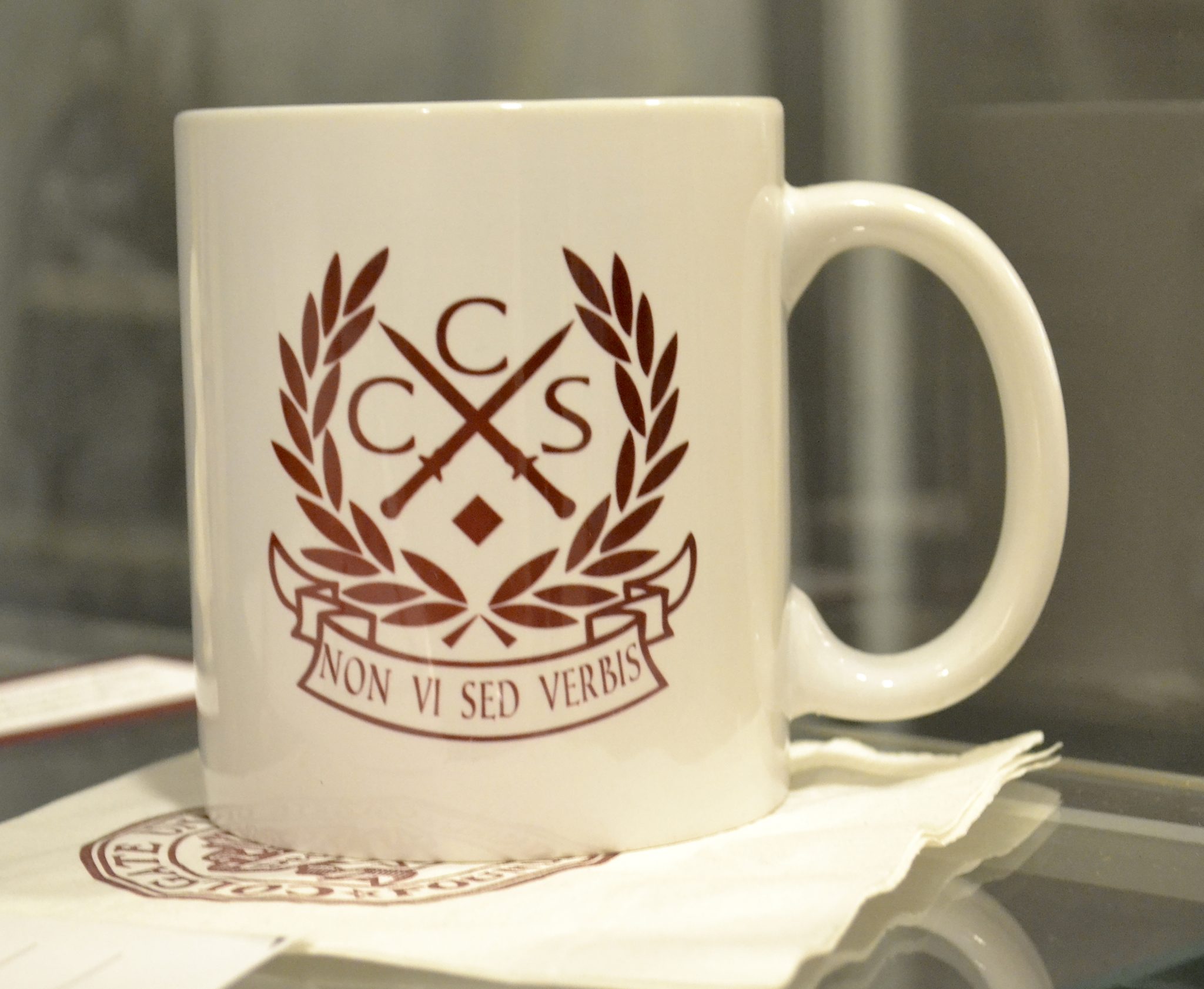 The Classics Society, a club for students interested in the classical world, created their own seal and motto. The motto reads: "Non Vi Sed Verbis," meaning "Not with Strength but with Words," which is the approach that today's students take in order to conquer their classes each semester. The classical theme of the laurel wreath is portrayed on the seal along with two crossing swords and the letters C C S, an abbreviation for Colgate Classics Society.