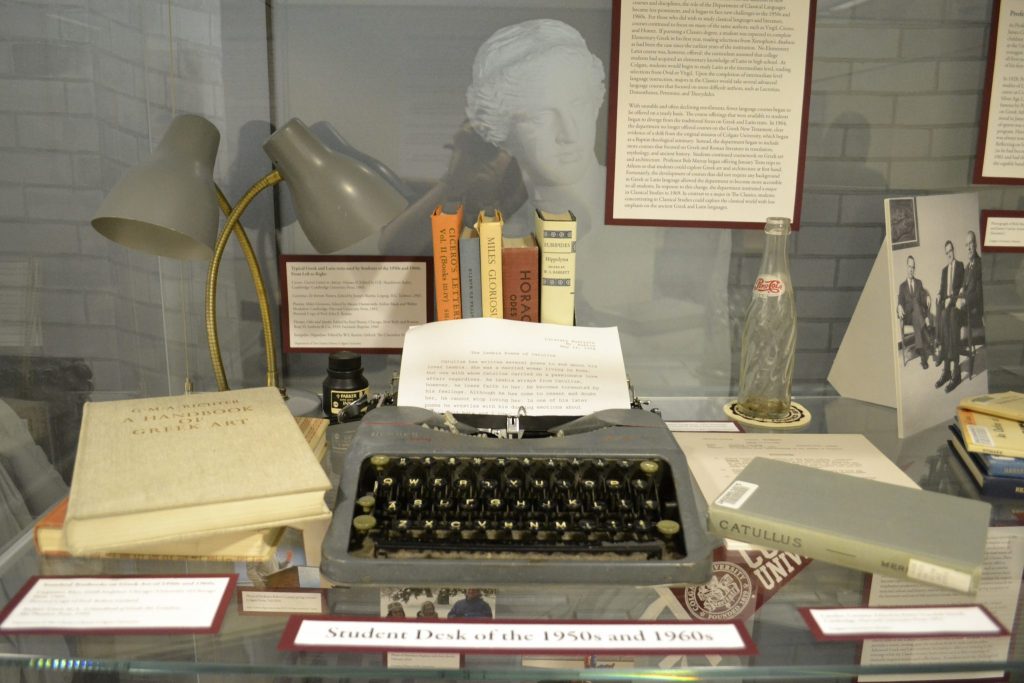 New Challenges for the Department

As Colgate University expanded its curriculum with the addition of new courses and disciplines, the role of the Department of Classical Languages became less prominent, and it began to face new challenges in the 1950s and 1960s. For those who did wish to study classical languages and literature, courses continued to focus on many of the same authors, such as Virgil, Cicero, and Homer. If pursuing a Classics degree, a student was expected to complete Elementary Greek in his first year, reading selections from Xenophon’s Anabasis as had been the case since the earliest years of the institution. No Elementary Latin course was, however, offered: the curriculum assumed that college students had acquired an elementary knowledge of Latin in high school. Upon the completion of intermediate level language instruction, majors in the Classics would take several advanced language courses that focused on more difficult authors, such as Lucretius, Demosthenes, Petronius, and Thucydides. 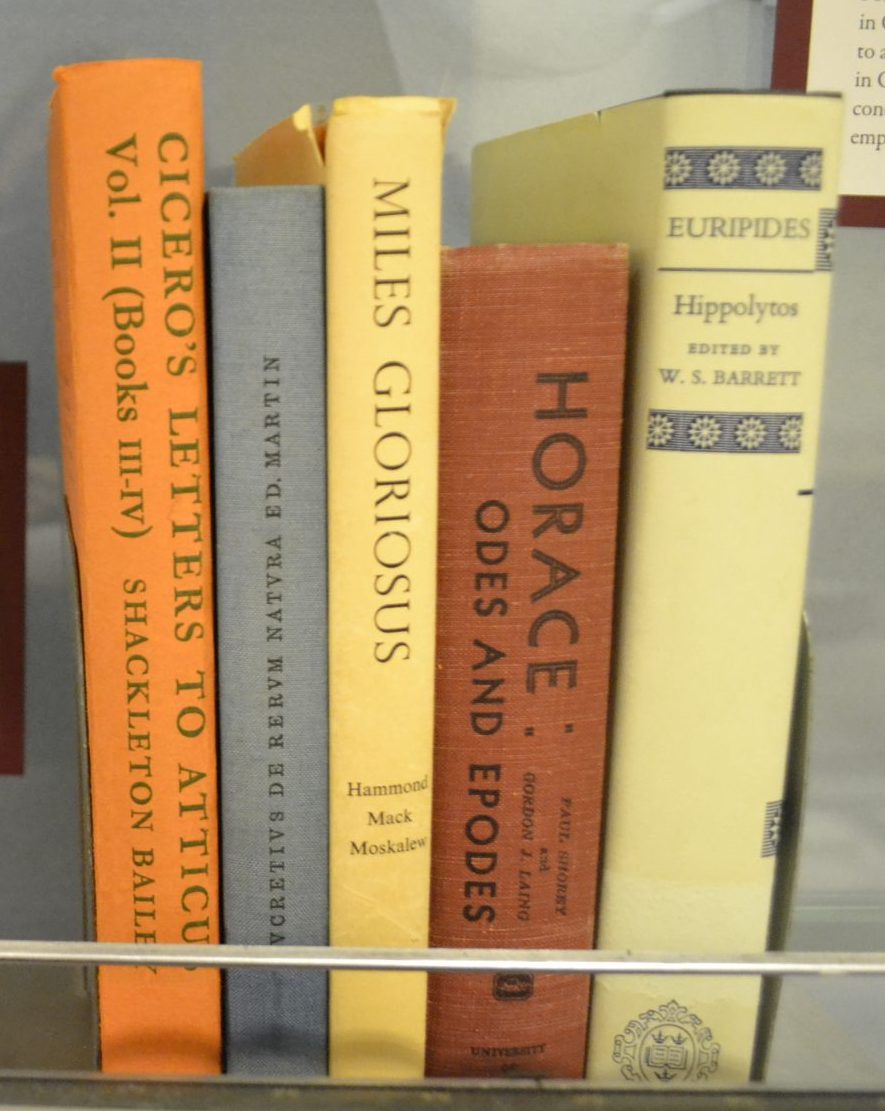 Selected textbooks from Student Desk of the 1950s and 1960s. 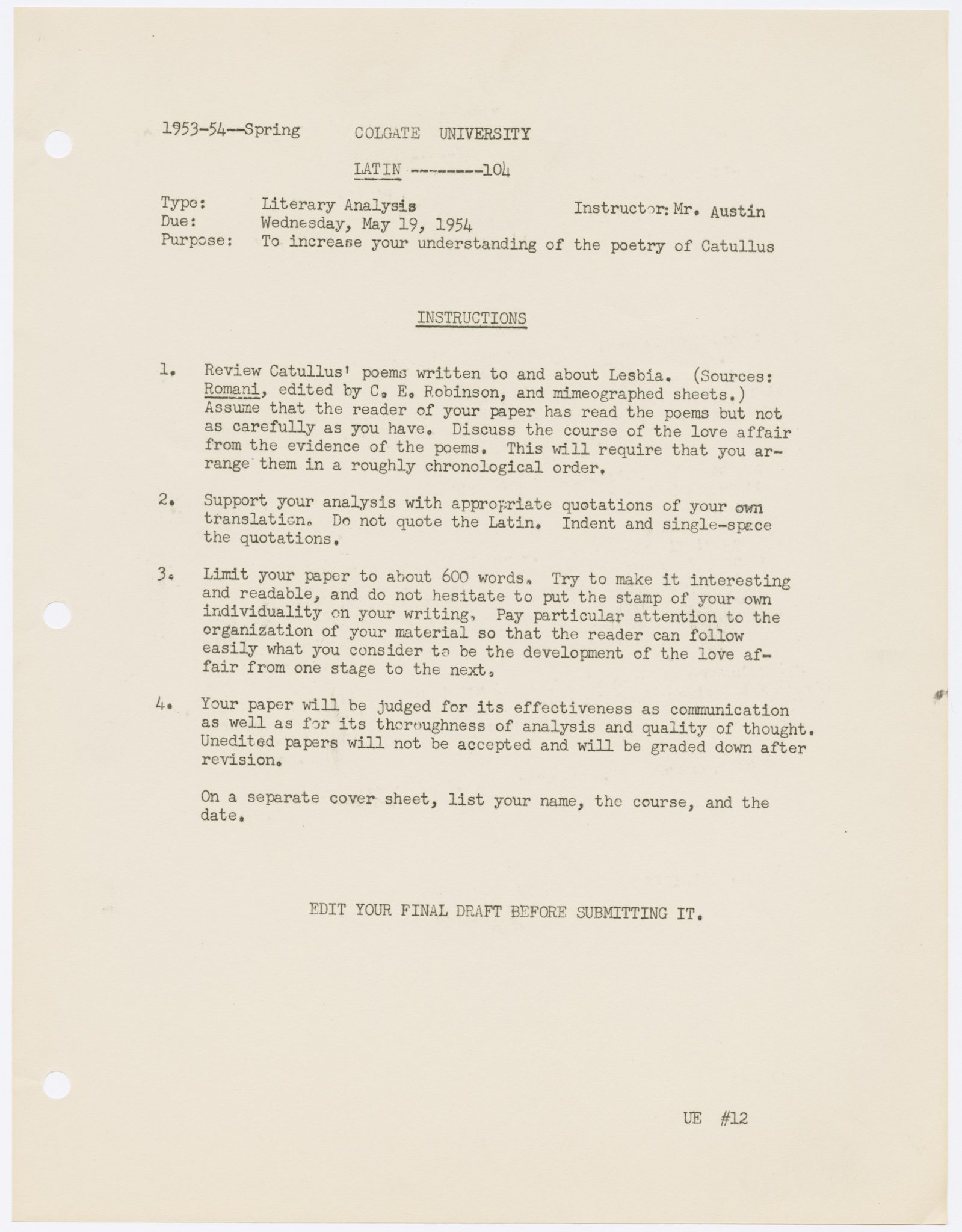 With declining enrollments, fewer language courses began to be offered on a yearly basis. The course offerings that were available to students began to diverge from the traditional focus on Greek and Latin texts. In 1964, the department no longer offered courses on the Greek New Testament, clear evidence of a shift from the original mission of Colgate University. Instead, the department began to include more courses that focused on Greek and Roman literature in translation, mythology, and ancient history. Students continued coursework on Greek art and architecture. Professor Robert L. Murray began offering January Term trips to Athens so that students could explore Greek art and architecture at first hand. Fortunately, the development of courses that did not require any background in Greek or Latin language allowed the department to become more accessible to all students. In response to this change, the department instituted a major in Classical Studies in 1969.

Classical Architecture Projects from the 1960s

Department of the Classics,

Department of the Classics, Colgate University.

Department of the Classics,

In the 1960s students were focusing on more than just language. These student-made projects reflect the expanded curriculum and the interest in the architecture, art, and material culture of the ancient world. These are all models of ancient Greek temples: the Athenian Treasury at Delphi, the Hephaisteion near the Athenian agora, and the temple of Athena Nike on the Acropolis in Athens. The temples were recreated with close attention to architectural motifs and were used as 3D teaching tools as compared to the usual 2D photographs of temples.